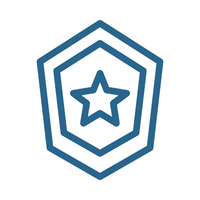 Collating some “Deep Dive” content here shedding light on the inner workings of psPAS, starting with New-PASSession, the most important command in psPAS and the first command explored and developed for the module way back in 2017.

What makes the New-PASSession command so important?

Each and every time any psPAS user needs to use the module to access the API of their CyberArk solution, New-PASSession is the first command they will run, making it by far the most crucial code in the whole module, as well being as one of the most viewed commands in the module documentation, and on the psPAS GitHub repo.

As the aim is for New-PASSession to be compatible with all supported API authentication methods, it is also one of the most complex functions in the entire module.

If you want an understanding of what is going on behind the scenes of the command, this is the right place.

The invocation flow of New-PASSession to API authentication looks like this (as does any standard psPAS code flow): 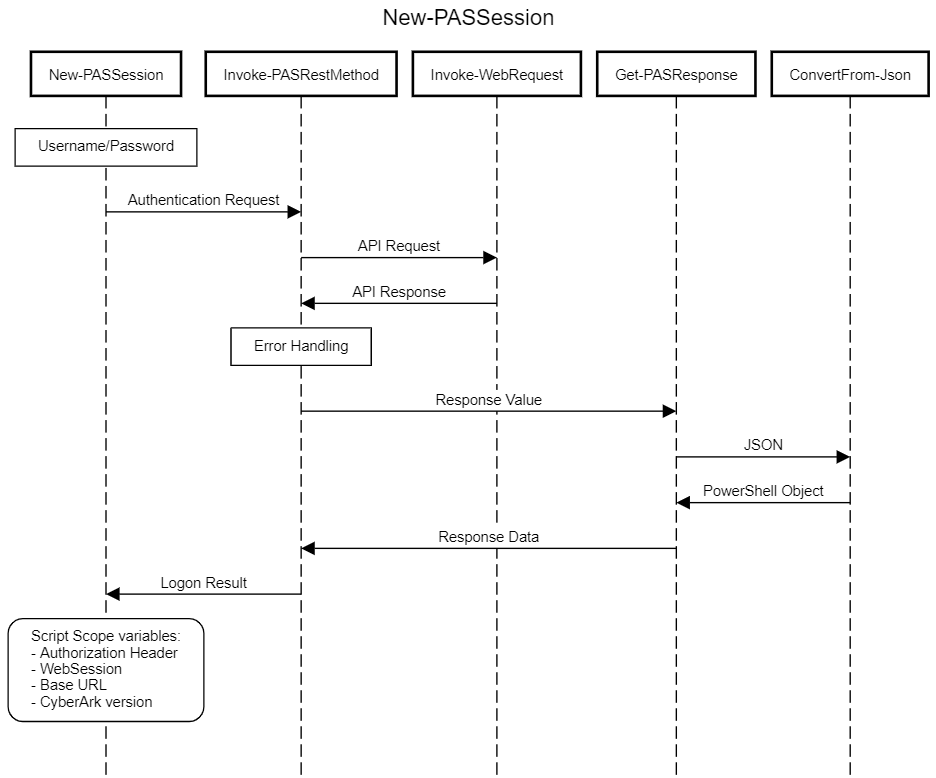 If everything goes according to plan, we will have a login token from the API at the end of the procedure.

In addition to saving the API URL and API version information, New-PASSession also conveniently stores the login token as a header value in a WebSession object variable in the script scope of the module.

As all of these values are saved in the module’s script scope, they are now available to, and able to be referenced by, all other module functions without the values being exposed to, or provided by, module users for ongoing module operations.

All user facing commands in the module which send requests to the API use the variables set in the script scope to authenticate and direct responses to the API. They also follow the same internal pattern seen in New-PASSession, with the API response passing through the internal functions until any response is returned as a PowerShell object to the context of the originating command.

The following diagram provides a higher-level overview of the module’s RADIUS authentication flow: 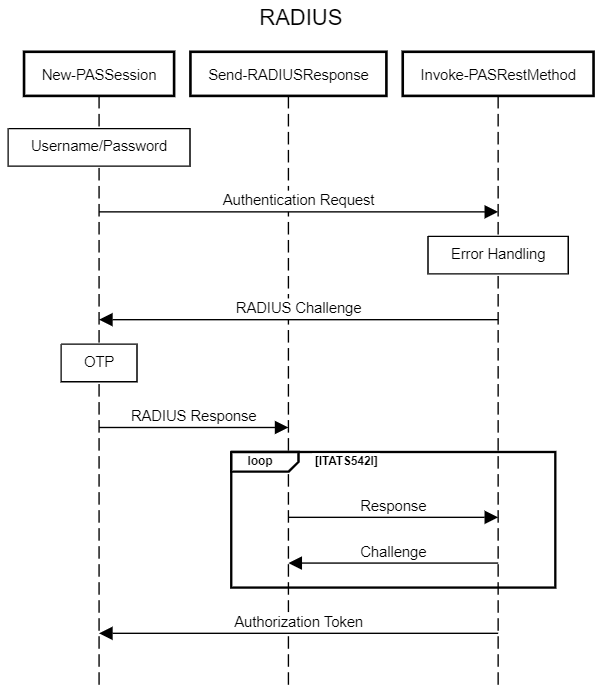 We use Invoke-PASRestMethod as a wrapper around the Invoke-WebRequest PowerShell CmdLet so that we can catch any errors that might arise while using the API.

When New-PASSession encounters an ITATS542I exception, we know a RADIUS Challenge is contained within it.

Any required OTP is provided, or prompted for, and is then sent back to the server issuing the challenge.

Send-RADIUSResponse will continue to handle additional ITATS542I exceptions for additional necessary challenges up until user responses are satisfactory for the authentication attempt or a challenge fails.

The API responds with a Logon Result containing the necessary authentication token upon successful completion of all challenges.

This necessitates that users must first successfully authenticate against any IIS authentication requirements in addition to the vault authentication. A few examples are:

In each case, the required authentication factors are passed to Invoke-WebRequest, allowing IIS authentication to take place before any subsequent attempt to authenticate to the vault.

This flow is shown below: 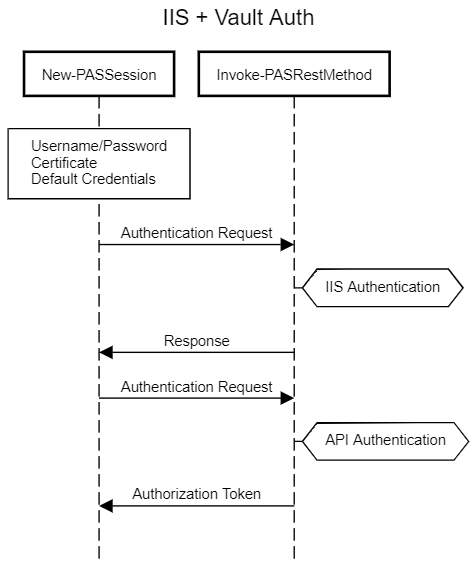 Any supplied certificate information or credential values will be stored as a reference in the script scope WebSession object that the module uses for subsequent operations, ensuring that any ongoing IIS authentication requirements are met after the first API authentication , and when other module commands are executed.

SAML authentication requires a SAMLResponse value from your IDP to be passed to the API.

When you supply a SAMLResponse value to New-PASSession, the API receives it and returns the necessary API authorization token after successfully accepting and validating the SAML token. 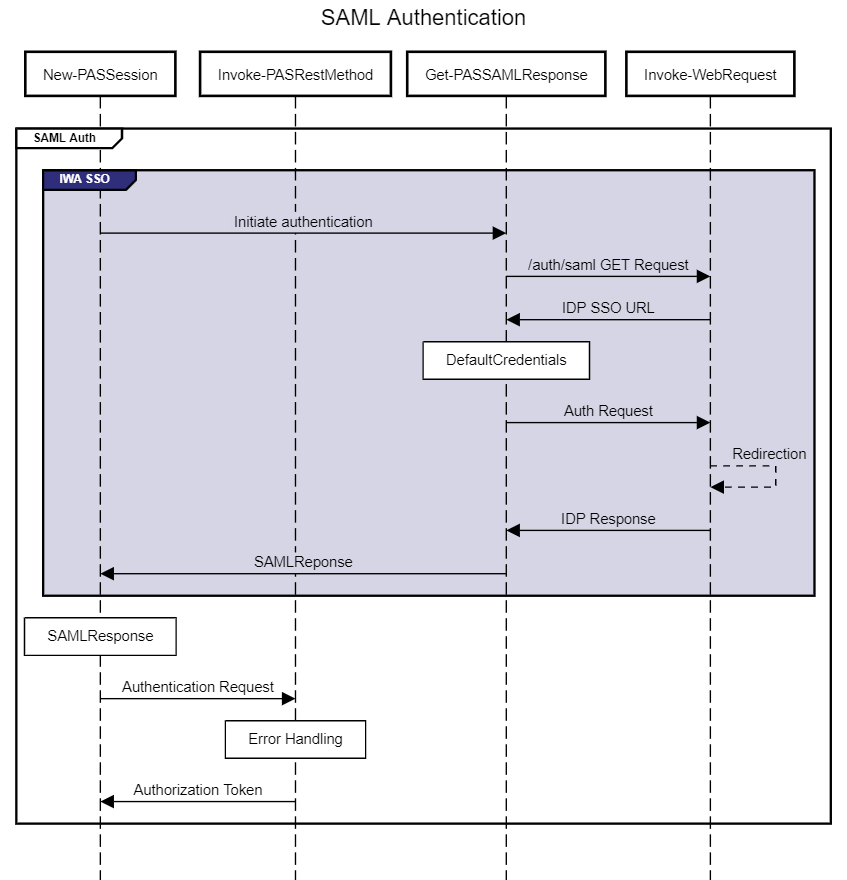 Get-PASSAMLResponse obtains the IDP SSO URL from PVWA, and provides the default credentials of the PowerShell Session to the IDP, following a number of web redirects until receiving the required SAMLResponse. Many factors and configurations may influence the success of this command, and a SAMLResponse will not be able to be obtained from all IDPs.

There are many SAML IDPs which may be in use, far too many to incorporate all available options into psPAS individually. While there are no plans to add capability into psPAS to get a SAMLResponse from any other IDPs out in the wild, if you have a method to obtain a SAMLResponse from a particular IDP, consider sharing it - this is a topic we get contacted about regularly; while we’d love to be able to provide answers for all SAML authentication platforms, it is beyond the scope of the core capabilities of the module’s intended purpose.

This is where the power of the CyberArk & PowerShell communities comes into play… Allyn Lyndsay, a fellow CyberArk Guardian, has created a significantly handy tool to interactively authenticate to your SAML IDP, and return the SAMLResponse for use in other calls, like New-PASSession.

Find the tool and see it in action on GitHub here: PS-SAML-Interactive

Now you understand how New-PASSession functions, and leverages various psPAS internals to successfully authenticate against the API!

Did we forget anything?

Let us know if there is any further information you would want to see or if you have any questions that have not been answered.

You may also enjoy

What a time to be alive… We’ll be updating this section of the website with release notes for new psPAS versions as well as some solutions, recommendations, ...

All contributions, whether comments, code or otherwise are welcomed and appreciated.